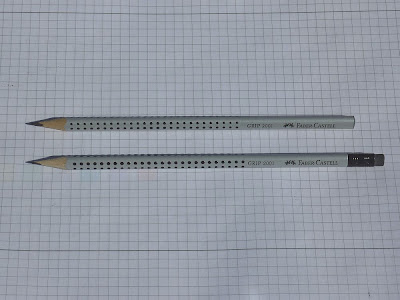 For my next review, I thought I would try a competitor to the Staedtler tradition: the Faber-Castell Grip 2001. This pencil is widely available here in England, and is marketed as a high-quality pencil which is produced in two variants: one with an eraser, and one without. This blurb from Cult Pens gives an idea of the market for this design:

The eraser-tipped version costs 99 pence in my local WHSmith’s, an 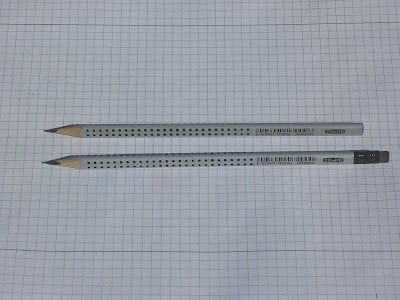 d the non-eraser version (the more common of the two) costs 89 pence, which is about half as much again as the Staedtler tradition. My local WHSmith sells this pencil only in HB, though a quick check on Cult Pens shows it to be available in up to five grades: 2B, B, HB, H and 2H. This suggests to me that the Grip is really optimised for writing, rather than drawing. 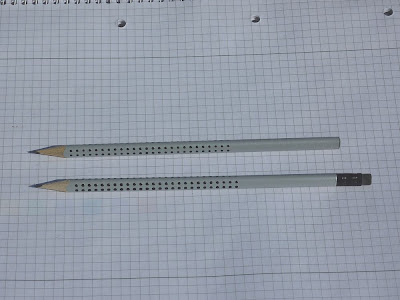 The Grip is a striking-looking pencil. For one thing it has a triangular section, not hexagonal, is finished in a smart silver-grey matte lacquer, and sports 26 rows of raised dots painted on in black along each side of the barrel. Their purpose is to provide a non-slip surface for the user. On the non-eraser version I used, the end-cap is painted in a gloss gull-grey. The shade of the end-cap varies from black for the 2B to a light grey for the 2H. The lettering (which occupies only two sides of the pencil) is crisp and the barcode is tastefully printed and unobtrusive. The eraser variant sports a ferrule and eraser in black, to match the lettering.

The wood used is not cedar, but I am not sure what it could be. It has a pronounced grain with easily visible pores, and there is no odour from it. In my KUM sharpener it sliced the wood very easily.

I used this pencil exclusively for a few days, and my overall impression is that this is indeed a quality pencil for writing. The HB lead is lighter in colour than Staedtler’s, and requires sharpening less frequently. For example, during a two-hour meeting at work I wrote some five sides of notes and needed to sharpen the Grip only once. The point stays sharp longer, and even when it has worn down it still lays down a good, legible line. It is not so prone to smearing as the Staedtler HB, nor to breaking; using my KUM sharpener I could get a very sharp point which would not yield under moderate writing pressure. Even when the point has worn down, and provided I did not press too much into the paper, it would leave a thicker, though still silvery, line. F-C’s HB standard is harder than Staedtler’s, for example. I would estimate that F-C’s HB is at least one if not two grades harder than Staedtler’s so the HB on a Grip 2001 would equate to a Staedtler H.

The triangular grip is reasonably comfortable, but I am not sure it is any more so than a traditional hexagonal pencil. However the main problem I experienced using the Grip was that the raised dots would dig into my fingers, so that after a fairly short period of time I would feel some discomfort in my writing hand where the pencil rests on my middle finger. This is not a problem for writing notes but for extended periods I think it would be. To be honest the Grip idea seems to me to be a gimmick, a way of differentiating this design of pencil from its competitors. I do not have a problem with slippery pencils, but I find the Grip to be uncomfortable after a while.

Furthermore I wonder if Faber-Castell has practical difficulties manufacturing this model. Close inspection of the few Grip pencils I have, shows the dots to be unevenly applied. Some are rounder and more pronounced than others, whilst some are not even full circles, but have a slice taken out of one side. 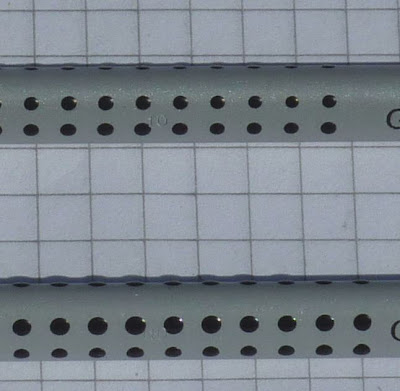 But any gripes I may have are very minor. Overall this is a high quality pencil – and a very modern one, too. It is not a favourite of mine because of the comfort issue which I mentioned above, which is odd considering that this pencil is marketed as one which can be used for long periods. Its price puts it almost in the premium pencil class – nearly as much as the Mars Lumograph, for example, or F-C’s own 9000 series. I don’t think it’s quite as good as that and I would rather use a 9000, but this is still a very nice pencil for the money and well worth trying.

Posted by Stationery Traffic at 21:47