I have mentioned before on this blog, that one of my hobbies is astronomy. I have been interested in it since I was 11. Here is a short story describing how astronomy and stationery collided for a moment.

Sir Patrick Moore is known internationally for his books on astronomy and here in the UK as the presenter of the long-running science television programme, The Sky At Night, which he has presented monthly since 1957. To say that he is something of a childhood hero of mine is an understatement. I had never actually met him, although I did see him once at a British Astronomical Association meeting in the mid-1980s.

So, when a friend who is also a keen amateur astronomer suggested that we drive down to Selsey to visit his house, I jumped at the chance. He was to open his large garden for the afternoon in aid of charity, and there would be stalls selling books, bric-a-brac, tea and cake, and so on. He is 88 now, and confined to a wheelchair, and was unable to join the crowd for most of the time the event was taking place. One of the organisers of the event told me that he would come out of the house at four o'clock to draw tickets for the raffle. I was hoping to get an autograph or perhaps a peek inside one of his observatories.

At the appointed time, Sir Patrick emerged from the house to draw tickets for the raffle, and auction a few books for charity, which he was to autograph. He did not sign them with a pen, however: I saw his personal assistant sign one of the books on his behalf - with a self-inking rubber stamp. I quickly asked for an autograph for myself; fortunately I had some 3x5 index cards handy in my bag, and quickly produced one, which was duly stamped: 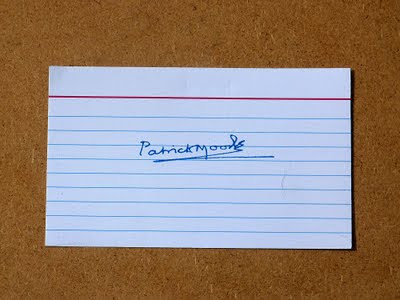 He apologised for being unable to write the autograph personally; arthritis has robbed him of his ability to play music, write and do other tasks. I assured him that this was just as good, however, and it is. It's not that often that my interests intersect like this. I will treasure this autograph, and have already framed it.

Afterwards, he did show me and my friend his observatories, and we left for home very happy indeed.
Posted by Stationery Traffic at 10:43