I couldn't help but notice this on the Guardian's website the other day: the Dutch photographer Jan Banning, has published a book, Bureaucratics which profiles portraits of public officials around the world.

This one attracted my attention: the piles of old papers dumped on the filing cabinets, the tatty desk, an overwhelming sense of the sheer pointlessness of it all. Most of the bureaucrats depicted are in mundane roles, such as town clerks, notaries or local police officials. They have to deal with members of the public. State symbols, such as flags, coats of arms, portraits of the founding fathers or current presidents line the walls of the offices. Desks are littered with stationery obviously, the occasional desktop PC or laptop, and all sorts of bric a brac. The offices are usually plainly decorated as you would expect public buildings to be.

I work as a civil servant and found that I related to many of the people in these pictures. I would take a photo of my office if I could, but my employer forbids photography on the site. Needless to say the open-plan office I work in is as dull as any of these places. Although officially, as a Crown servant, I work for the Queen, not the government, there are no portraits of Her Majesty on the wall. Sometimes the Union Jack is flown from the flagpole outside, but not every day. A visitor would be hard-pressed to know that this was a government building (except perhaps for the peeling paint on the walls). The buildings are old, but the furniture and equipment is modern, and I spend all day using a PC. Many of the old trappings of officialdom are out of use; for example it has been years since I filed a document in paper form, or stamped a document. In a way, I miss the old fashioned office ways. In my first job in the civil service, I was a clerk and had to do all those things: typing out documents, obtaining signatures, stamping them, filing them. I will have to post some more reminiscences of those days, which, despite being less than twenty years ago, feel a lifetime away.

In some months, my job will relocate to a nearby large city, and I'll be working in a modern office building. The move will mark the end of an era; I'll be coping with a longer commute and alternative working patterns and doing everything electronically. In the office there's a box full of redundant rubber stamps. I hope I can rescue them for posterity if not actually get to use them officially.
Posted by Stationery Traffic at 23:45 1 comment:

Watching Neil Oliver's series "The Age of Iron" on BBC2 the other evening, I could not help but notice another Staedtler user: 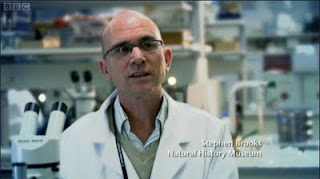 This is Steve Brooks of the Natural History Museum. He is a research entomologist who researches climate change from midge larvae found in lake bed sediments. 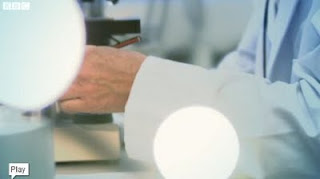 Whilst he counts Chironomid midge larvae in the eyepiece of his microscope, I count one pencil with distinctive black and red stripes, white band and black end-cap. 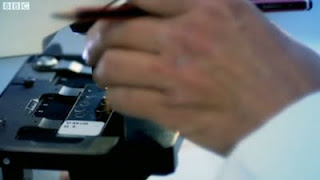 These Staedtlers can be found everywhere - in the laboratory, and perhaps even in ancient lakebed sediments.
Posted by Stationery Traffic at 22:44 2 comments: