This is the EDC 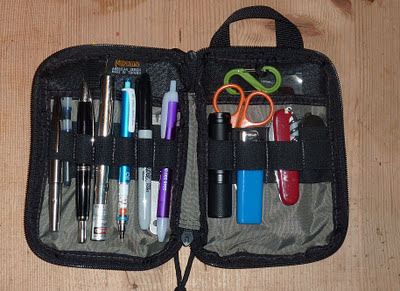 Recently I bought a Maxpedition EDC Pocket Organiser online to organise my EDC (Every Day Carry). I spent a lot of time recently, reading about EDC and watching videos on Youtube on the subject before getting the organiser, pictured above. Regular readers will notice a couple of familiar items in the picture. From left to right, they are:

Since the picture was taken, I have changed things around somewhat. I don't usually carry the laser pointer (which I use for astronomy) or the loupe, and instead carry a Snow Peak titanium spork and a couple more pens - a Pilot 78G filled with Private Reserve Plum ink and a Pilot V5 rollerball pen. Do you think I like Pilot pens much?

The EDC Pocket lives most of the time in my briefcase, or on my desk at work. There's only the one pencil, which I have not used so it may be rotated out. Pencils tend to live in a separate pencil case along with my eraser and sharpener. I usually move things around dependent on what I find most useful: hence the preponderance of fountain pens. If I worked somewhere other than an office, I'm sure the tools would be different.

One other thing I have done is to have an embroidered name-badge made which is stuck by Velcro to the hook-and-loop field on the front.

Posted by Stationery Traffic at 23:45