One of my hobbies is astronomy. It's been an interest of mine since I was eleven years old, on and off. For some time I've been making observations of variable stars for the British Astronomical Association's Variable Star Section. If you don't know what a variable star is, here's a link to Wikipedia which gives the basics. 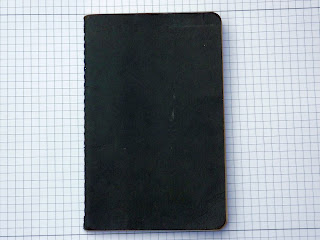 For a few years now I've used a Moleskine Cahier notebook to record my observations and now, finally, I've run out of space. I have already started the replacement, this time a Clairefontaine notebook with much nicer paper and a slightly bigger size. I've also changed pens: after using a Uni-Ball rollerball pen I bought a green Pilot 78G to use with the Cahier. Then I found the Pilot V-Pen (known as the Varsity in the US) which I emptied out of the original mint-green ink and replaced with black ink. Now, with a new notebook I have redeployed my Pilot Capless and filled it with the same black ink. 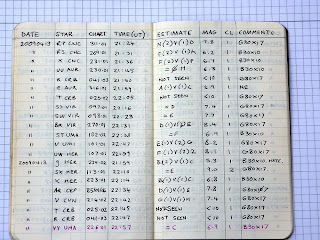 Although I have changed pens, I've not changed ink. I use Noodler's Bulletproof Black to record my observations, and at the rate I use this ink, my 3oz. bottle should last me years. I use bulletproof ink for its permanence; these observations probably are the only things I write which are worthy of preserving for the future, even though I have to write them subsequently on an Excel spreadsheet before they go into the BAA's database which starts in 1890. I also use it because of its waterproof quality as the nights can get quite damp here in England. But this is the only use I have for bulletproof ink; most of the time I use blue Quink or a pencil, even though, like many fountain pen users, I own a glut of ink in various colours from a wide variety of manufacturers. 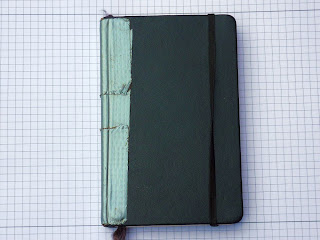 Looking through the log, I see I started this notebook back in 2007. It doesn't have my earliest variable star observations, those are in another Moleskine I bought when I worked in London in 2005 (pictured, with the natty Duck Tape binding).


I own a few Moleskines, but I don't buy them now. I admit, I was taken in by the hype and the marketing ("the notebook of Picasso, Hemingway and Chatwin") but this was before I rediscovered fountain pens, and the fact that fountain pen ink bleeds like mad on the trademark yellowish Mole paper. The quality of the paper used is a constant source of angst on the Fountain Pen Network; I eventually found a nice replacement in the Clairefontaine, which I can buy locally too. Sometimes I wonder what Picasso or Hemingway would make of today's Moleskine notebooks. Would they complain about the quality of the paper or the fragile binding? Were they really that fussy about their paper or notebooks?

I've still got a few pages in the Duck Tape Moleskine but soon that will be history too. I also own a large plain Mole which has only a few pages filled in. I bought that to make sketches in but found the paper too thin, even for pencil sketches. Finally I have a small ruled Moleskine which serves as my general-purpose notebook and in which I write all kinds of things. When both notebooks are finished it's highly unlikely I'll buy Moleskines to replace them, however. 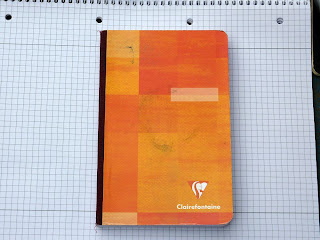 On the subject of Clairefontaine, I have several of their cahiers and an A5 pad of their drawing paper. Here's a picture of my new variable star logbook, this orange one being a handy size, with a cheerful colour (not that I can see it in the dark). The paper inside is superb: smooth and white, nicely-printed feint lines, no feathering, no bleedthrough. Couple that with a top-quality pen and ink, and the mundane business of recording a scientifc observation becomes a pleasure in itself.
Posted by Stationery Traffic at 21:42