I was asked in the comments to the Faber-Castell Grip 2001 to write a review of these two in tandem, because, although they are made for different jobs, they both leave a similar mark on paper. Before I start, though, I must express my thanks to Matthias Meckel who sent me the pencils in this review. 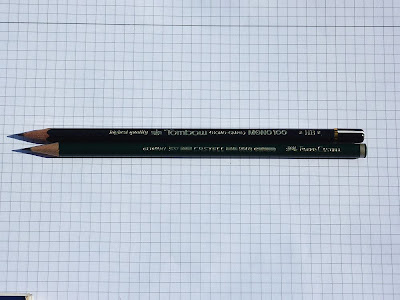 These two need little introduction to those who enjoy fine pencils, but just in case you don’t know about them, here’s a bit of background information. The Tombow Mono 100 is a top-quality drafting pencil (it even says so, on the side). It is reputed to be a favourite of animators and manga artists. The Faber-Castell 9008, in contrast, has a much more quotidian purpose: it is a stenographer’s pencil, designed for writing shorthand. It is one of the few high-quality round-section pencils made today, but for how much longer is anyone’s guess as shorthand writing has fewer practitioners now. I lamented the lack of round-section pencils recently in this post but I’ll repeat myself here. There must be many users who find the conventional hexagonal or triangular section pencil uncomfortable to use for long spells, so why the major manufacturers do not market round pencils more, is a mystery to me. 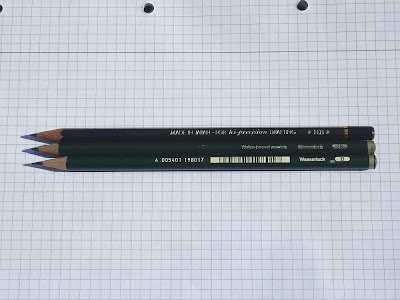 Before discussing the performance of these pencils I want to mention their physical characteristics. The Mono is supplied unsharpened, and is painted in a gorgeous, glossy black lacquer. It is topped off with a black endcap with a white line in the centre. All the lettering is gold-blocked, and is a riot of typography with various fonts shouting Engrish statements in addition to the essential information. It also has an outline picture of a dragonfly, after which the company is named. The dreaded barcode is printed on this one though I have another Mono 100 on which the barcode was applied as a sticker. The 9008 is painted in Faber-Castell’s trademark dark green lacquer with a silver band at the end. Gold block lettering with the country of origin, model number, manufacturer, the word “STENO” and the name “CASTELL” are printed. 180° away is printed the grade of the lead and, presumably to reinforce Faber-Castell’s environmentally-friendly credentials, the German word “Wasserlack” (water-based paint). I should note that I was so impressed with the 9008s Matthias sent me that I bought some more , in B grade. Clearly, the two versions of the 9008 I have were made in different batches as the 2Bs have all gold lettering, whilst the Bs have the reverse lettering printed in primrose yellow. There is also a slight difference in the green paint: the 2B is darker than the B.

In use, the pencils are remarkably similar. Both leave lovely, dark lines on the page. The 9008 is perhaps slightly darker: not surprising, considering this pencil is two grades softer than the Mono. The Mono 100 is slightly smoother on paper, but really not by much; it glides along as though lubricated by a coat of oil, and though the 9008 has a bit more tooth, it could never be described as scratchy. When writing, I found that neither pencil required much pressure to write darkly.

Given that the lines left are dark enough for anyone’s purposes, any differences really come down to how the pencils feel in the hand. For me, there is no contest: the 9008 is the hands-down winner. Why? The circular section is simply far more comfortable in my hand than the hexagonal Mono 100. Indeed, I found the edges of the Mono to be sharper than other hexagonal pencils I own, such as the Staedtler Mars Lumograph. I suppose this is due to the lacquer Tombow use; on the Mars, the edges are softer, probably a product of the number of layers of paint used. A close examination of the Mono 100 does not show any sign of woodgrain, so the lacquer must be fairly thick. I can only surmise that it is the way in which Tombow applies the lacquer on the pencil: fewer layers, but denser paint (and most definitely not “Wasserlack”). Whatever the paint used, I found that the Mono 100 dug into my fingers after a short period of time. The 9008, by contrast, was a joy to use because, with no corners or edges, my fingers would mould themselves around the pencil’s barrel.

Both pencils are excellent, either for writing or for drawing. I have found my favourite pencil so far in the 9008, but the Mono 100 is not far behind, and I’ll use the Mono for astronomical sketches.

Posted by Stationery Traffic at 16:52