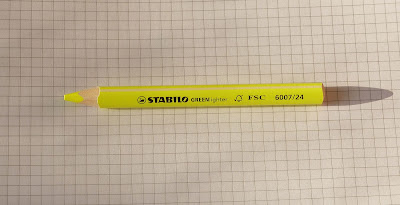 I was intrigued enough by this review at Pencil Talk to search out the Stabilo GREENlighter highlighting pencil at a stationer's some distance from my home. I've used Stabilo Boss highlighter pens for years, but the idea of using a pencil for hightlighting text made more sense. I've found all highlighter pens dry out unless you replace the cap, and of course the process of highlighting demands the reader to use it intermittently, which means having to take the cap off and replace it numerous times during a spell of reading and highlighting. Another reason for using a pencil is that I have found highlighter pens to smear fountain pen ink, and as I use a fountain pen I wanted to avoid that if at all possible.

Based on the Pencil Talk review, I purchased only the yellow version of this pencil; the green and pink variants aren't as good, apparently. It takes a little getting used to, because more effort is needed to leave a useable layer of highlighter than a pen. The hightlighting is more subtle than a pen's. The highlighting core has a smooth, deep waxy feel and glides over the paper, though as I say, it needs more pressure and multiple passes to leave a healthy line.

The barrel of the pencil is triangular in section and painted in dayglo yellow with thin white lines. All information is printed in black, as is the FSC logo.

I've really enjoyed using this pencil and it has found a place in my pencil case. This one is a winner, in my view.
Posted by Stationery Traffic at 20:01