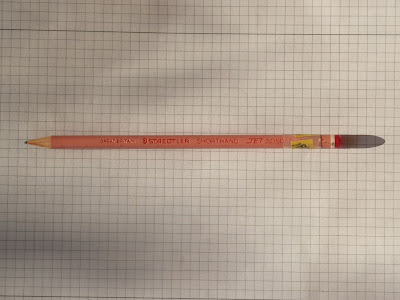 Third in this series, I'm really excited by this find. It is a Staedtler Shorthand pencil, HB and made in Great Britain. I found this on 22 October 2010 in a stationer's in Southampton. It is salmon-pink with a white band and a red painted end-cap, and the lettering (stamped in red) says:


I love the stylised typography of the words "Staedtler" and "Jet Bonded". The model number is obscured by the price label - but I think this was model number 114. This pencil is a bit scuffed from years languishing unloved and unwanted in the stationer's pencil rack, but I'd like to think that has now ended and it has found a welcome in my modest collection. I've not tried writing with this pencil, so don't ask yet how well it writes.

I did not even know that Staedtler made stenographers' pencils here in the UK, so this was a delightful surprise for me. This clearly is one of the predecessors of the rare-as-hens'-teeth Stenofix. As it happened, I found this just around the corner from where I used to work, and shared an office with a shorthand typist called Joan. That office is now a hairdresser's.

This pencil was a bargain, as it cost me only 50p! I feel like I've just unearthed Sutton Hoo. What a shame they only had one in the rack, as I'd have had the lot. Never mind, I also found a somewhat beaten-up made-in-GB Staedtler tradition 2H too.
Posted by Stationery Traffic at 00:35